A band of artists from BBQLA rode through Indianapolis on the last leg of their Fool's Journey, a migrating yearlong exhibition.
The show, staged at Sugar Space, was accompanied by a performance dinner informally referred to as Blabberque IN.
Borrowing from the concept of the Jeffersonian Dinner, the performance assembled eight artists to parse a term of art jargon in whatever medium they saw fit.
The event lifted two main aspects from the Jeffersonian formula-- uniting deliberately selected guests invested in a common mission, and holding the floor for presentation on a single topic at a time. 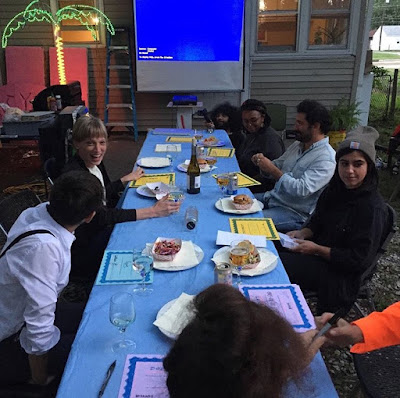 As moderator, I (Erin K Drew) introduced the concept by acknowledging Thomas Jefferson's fucked legacy as imperialist slave owner, and stating an intention to downplay his contributions to the evening. I conducted the night dressed as a more benign Jefferson-- a Jefferson Airplane. Operating under the maxim that If You're Not Uncomfortable You're Not Doing Performance Art, I attempted to enjoy a slaw dog prepared by guest chef, artist Tre Reising, and multiple glasses of wine. 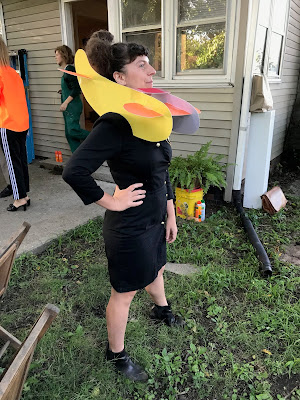 Presentations were given by:
Matthew Batty on Transcendence
Lisa Berlin Jackson on Problematic
A Bowden on Actuality
Bryn Jackson on Institutional Critique
Anna Martinez on Built Environment
Ben Martinkus on Appropriation
Breanne Trammel on Casual Institutions 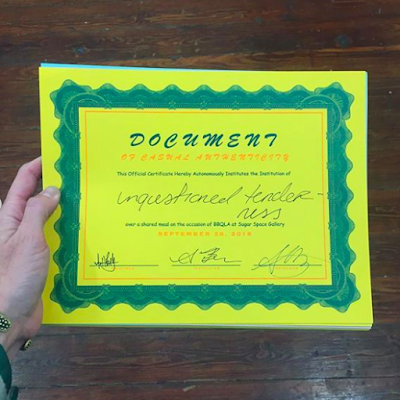 Performance mediums ran the gamut from slideshow to sound performance, publication + Q&A (Martinez) to play (Martinkus).
Trammel distributed certificates of casual authenticity, inviting participants to forge credentials for their own areas of expertise. 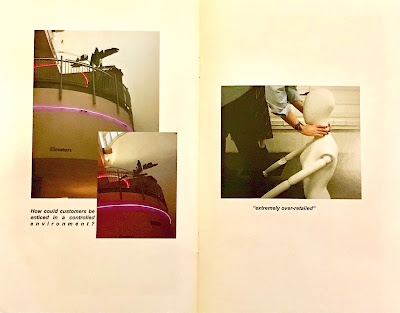 Bryn Jackson, an IMA employee, acknowledged the tension of his role in absentia; a tv set stand-in sped through his selfies taken with the contemporary collection. While Berlin Jackson recited a nursery rhyme recounting fraught dynamics at the 2018 Whitney Biennial ("Dana Schutz for solemn thrill/appropriating Mamie Till") and beyond, Bowden confronted BBQLA's own problematic past, performing a text that referenced artistic intruders with "good intentions."

"I like to take a walk after dinner," Matthew Batty stated before leading participants on a meandering walk around the neighborhood. Strapped with a small amplifier which blasted mysterious audio into the dark, Batty tested a trio of places to lean an aluminum ladder before resting it in a patch of the Sugar Space garden bed.