What were Difficult Women? 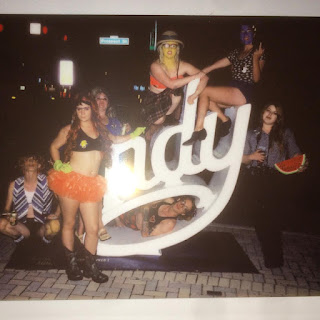 A few months ago I put together a little showcase to toast my old friend Jail Flanagan as she passed through town with her one-woman baroque no wave act, Forced into Femininity, accompanied by LA noise artists Dawn Raid and Some Pepper.
I approached the show as I have many-- hoping to create the illusion of my city as a feminist art utopia, even if it was only for a night. To pull off this con I called upon Hen, bootleg cheerleaders and purveyors of dance academy recital punk (The Only Band I Like), to round out the bill. Not finding any other immediately suitable acts, I solicited artist friends with interesting and challenging taste--Copy Culture. Taryn facilitated meetings for a group called Cream Team over the winter and wore cool handmade jewelry and liked the band Kleenex. Anna was a painter with a website called ihatepainters.com. and had awesome eyebrows.
Did they ever think about doing performance? 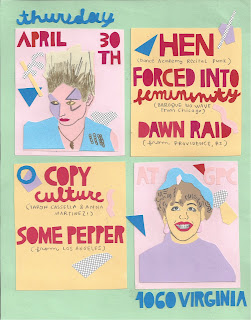 I titled the night Difficult Women-- a soft understatement, and made a Facebook event with a stunning picture from one of Jail's recent shows.
Within 24 hours 100+ people had RSVP'ed, an abnormal feat for a noise show.
Something had aligned just right, and this night of Difficult Women seemed to be resonating with certain Indianapolis residents. 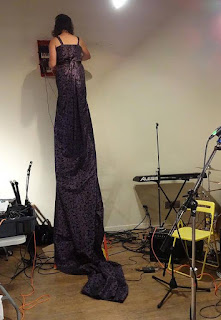 The show went well. Copy Culture's video "Consolation Prize" was hilarious and brilliant, and Forced Into Femininity hosted a Q&A for viewers mid-performance.

When Berlin-based theatrical chanteuse Mary Ocher contacted me about setting up a show in Indy, I decided to make it a series.

Much has been written about the stark class divide in art, and in Indianapolis specifically.
So often there are the people who make art and then there are the people who consume in.
Artists make work for whomever is willing to pay them, often censoring their own vision, sacrificing spontaneity and criticality along the way. Meanwhile, peers expect them to give their own art away for free, "for exposure," or for the sake of the scene, ultimately cheapening the specialness of their expression or the hours devoted to it.
It's a sticky situation, a capitalist vicious circle and the crux of plenty of existential strife.
It seems to me deeply ethical that artists receive fair pay for the strange mental work they are uniquely suited to do, that makes living in a city richer, that makes the human experience more fascinating.
So
it was important to me that as an organizer and artist/advocate, I could meet and exceed Mary Ocher's touring guarantee. This was not something I could expect to do with the traditional "passed hat" of DIY basement shows, and as a working artist, I clearly couldn't do it on my own.
But it became essential to me that it happen.
I was bewitched by her rawness, her unusual humor, her stunning aesthetic presence. (After viewing her videos, Youtube suggested I watch vids by Kate Bush and Werner Herzog, putting a finer point on this intoxicating combination of favorite elements.) 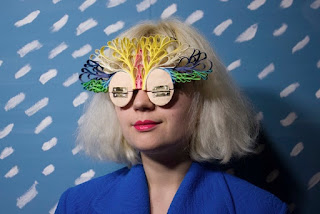 Her show became a jumping off point for thinking about the vitality of enticing unusual artists, particularly women, non male, and queer performers to come to Indianapolis. There seemed to be a void of venues specifically suited for this type of act, gay bars mostly giving billing to high ticket drag queens, DIY shows still representing the interests of Bands with Songs (with occasional notable exceptions). Yet the people who came to the first Difficult Women show or saw the Mary Ocher videos we circulated on social media were inspired and excited for more. Maybe the project of creating a temporary feminist art utopia was more important and timely than I expected.

I was not alone in thinking and talking about these issues. Lisa Berlin of Hen and General Public Collective played a particularly integral role in cultivating this idea. My own membership at General Public Collective added to the urgency and possibility of this project. GPC was the perfect place for Difficult Women showcases-- more visible than a basement, but scrappier than a venue, modular and mutating based on which of the collective members was organizing an event. Its doors are kept open (at erratic and unposted hours) with pledges from the individual members, who pay for their use of the space, or pay because they recognize the importance of the project.

Taking a page from this unusual manual for underwriting, Lisa and I looked for ways to make sure we could meet Mary's guarantee.
Naturally, we started puff painting sports bras. 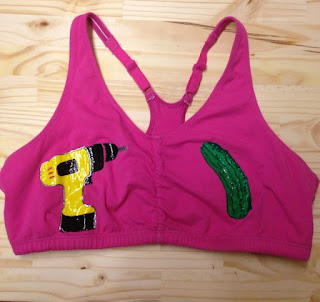 I'd worked with this material in the past (as a pre-adolescent and beyond) and found it hilariously sloppy but also versatile and gratifying. We set to work with Aimee Brown (the other half of Hen), decorating bras and tote bags with images of phallic objects in peril and icons of Difficulty, like Miss Piggy, Patty and Selma from the Simpsons, Dolly Parton, and Divine. 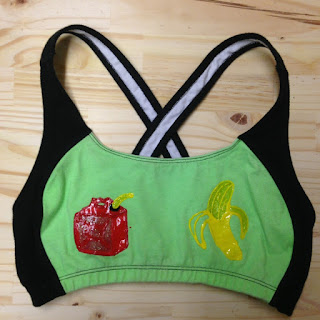 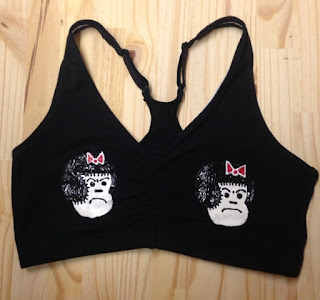 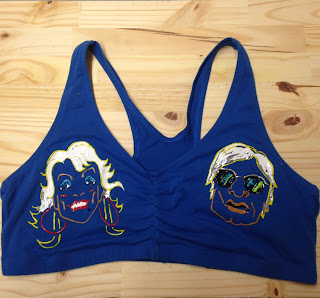 Our efforts culminated in a photo shoot employing the talents of some of Indianapolis' most active badasses and restless intellects. Rachel Enneking wielded the camera and coached us through the shoot. Jessica Dunn of Brain Twins edited the photos and worked magic behind the scenes, even with a fucked up foot. Cinnamon Coleman, Joey Morrow, Abby Goldsmith, Rachel Peacock, Lisa Berlin and I donned power suits, fruit hats, and body paint and channeled the spirits of Difficult Women past-- John Waters' Provincetown group, Amy Sedaris, Tom Rubnitz's "Pickle Surprise" video (starring a young Rupaul and Lady Bunny), and Cindy Sherman's creepy later oeuvre were all on my vision board. 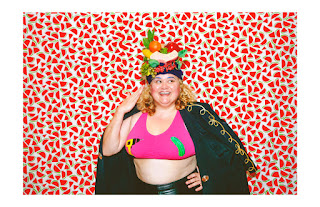 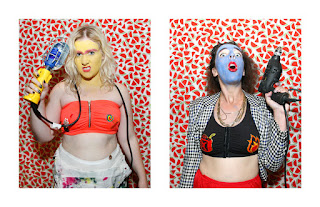 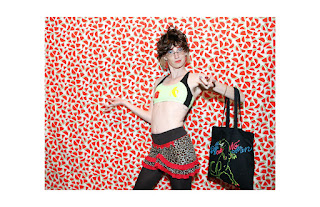 We premiered our photos and garments at a one night pop-up show at GPC. Garment displays for the show were assembled by Copy Culture--Anna and Taryn, who have both moonlighted in apparel merchandising and have amassed for their own artistic pursuits an array of sheets of colored plexiglass, mannequins in many textures, and mirrors. As our final touch, Taryn, Anna, Lisa, and I obscured the looming leftover graffiti mural from a previous pop-up with giant headless women, T.rexes with genitalia, shoes, and boobs. An enormous stylized vagina was exposed to Virigina Avenue passers-by but for a boudoir-style curtain hung in the front window. 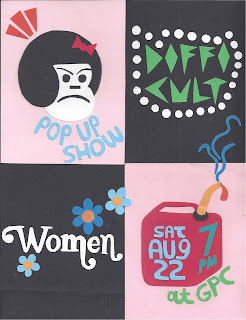 The opening was well attended and we sold out of tote bags in the first couple hours. DJ Miss Alicia played electro pop singles to strut to and I ate a couple croissants. We were able to raise Mary Ocher's guarantee and create a buzz about our project. Nobody's parents came and I didn't have to talk to any local alt-weekly art critics about the vagina or give a broad operational definition of feminism so the night was full of successes, mostly on account of the pure collaboration that it had become. 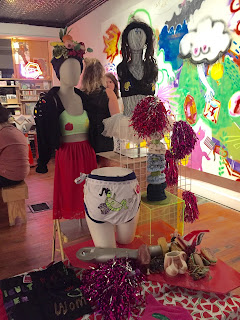 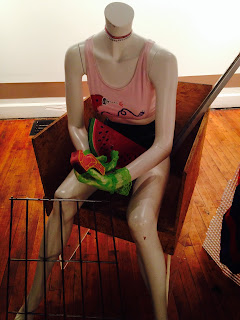 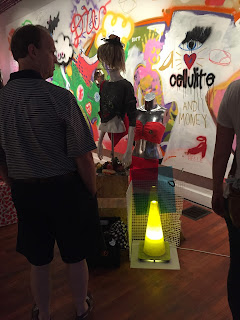 Mary Ocher played at General Public Collective on Sunday, September 13 with Hen, a new video from Copy Culture, and a trio of videos from Bad Psychic-- Liv Mershon's Bloomington-based lofi goth project. The shop was packed with difficult women of various genders from near and far, and kind of had that feminist utopia vibe. 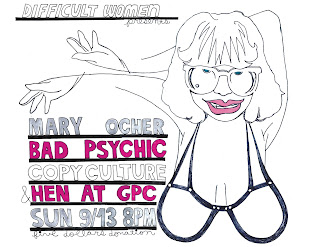 This project is not over.
Expect more Difficult Women showcases and pop-up shops in the future as we fund our endeavors through this ongoing experiment.
An altered incarnation of our pop up will be happening in Chicago at The Egg on Saturday, September 26!
https://www.facebook.com/events/1589592261301699/
Posted by Erin K Drew at 10:07 AM