TOP 5 AUDIOVISUAL ENCOUNTERS IN INDIANAPOLIS OF 2011

My friend Crafty from Everything, Now! asked me to write a top five end-of-the-year anything for his blog, Muscial Family Tree.
I chose to focus on Audiovisual Encounters-- with an emphasis on unexpected aesthetic convergences among art forms for all senses...In chronological order:

1. Paul Pelsue/Joey Molinaro/Sore Eros, March at MiCO (Midwest Museum of Contemporary Art)
In early 2011, Austin Reavis announced with transformative authority that his house was now a museum. Private turns public. The Midwest Museum of Art was an exercise in oppositions. Video projections of the fridge, beer in the bathtub,. Foot stomping percussion amidst densely packed ceramics. The bedroom gallery (Reavis' room, picked clean save for his futon) featured Paul B Pelsue's found pix of Tonka trucks, afghaned rec rooms, and ambiguous signage alongside a ziggurat of old TV's recording and broadcasting viewers in real time. 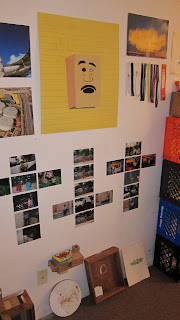 2. Jookabox last show and Know No Stranger, June at Earth House Collective
There was a lot to take in amidst Know No Stranger's multi-channel projections and the last chance to dance to the JB's creep-funk. The crowd could have turned sentimental had the tone not been set by tooth-grinding, grimy amphetamines ("I'm Slime!/And it's fine!"). Instead it was a Halloween party on a sweltering summer night with everyone in costume, make-up melting, ready to rage. 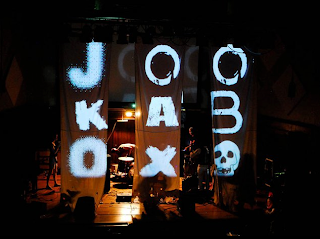 3. Ancient Aliens A/V Night with Castle Old Chair, Growth Spert, and Ligyro, August at Earth House
Dusk blooms into night over a mirror-like lake. Crickets scream as you lie on your back and scan the sky for UFO's. A perfect arc of energy piloted this show from Castle Old Chair's tape fuzz-laced bedtime tales through Growth Spert's frazzled vocals and frenzied aluminum percussion to the ambient electronic alchemy that transformed Ligyro's rainbow-colored tent into a spacecraft.

4. Mr. God's Galloping Mountain Variety Show, October, at Shared Heritage
A crew of Pittsburgh industrial hippies from the Cyber Punk Apocalypse brought their bare feet, bad tattoos, and bizarre conspiratorial writings to Shared Heritage. There were tales of police raids on high-tech lowlifes, lunatic ravings about post-consumer hotdogs, and noise interludes from an ominous emcee's box of contraptions. Gunner, awkward granddaughter of Dada, left the silence ringing in our ears with her costumed "stand-up comedy." 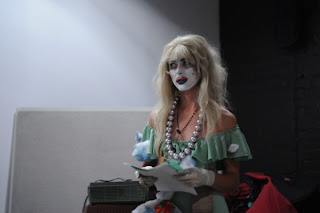 5. Auroradoreyalice and Crystal Lynn Thomas, November, at Shared Heritage
The crowning jewel on a night of high-quality trash jazz (with DBH, Sky Thing, and more), was the serendipitous pairing of Crystal Lynn Thomas's video mandala of perpetually melting candles with the warm but witchy keyboard drones of Auroradoreyalice. This quiet fire was a cosmic surprise suitable for 11/11/11.